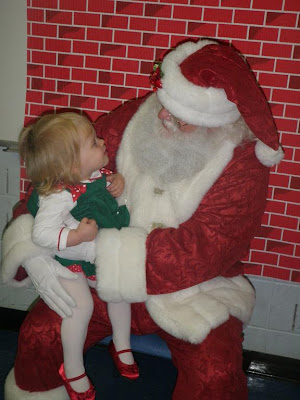 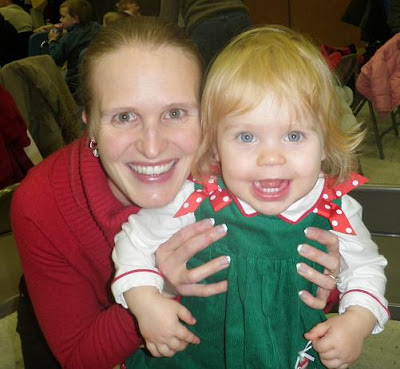 For the second year in a row, we attended Larkin's school holiday party. Several of the classes get up on stage to sing toddler versions of Christmas carols and they are ridiculously cute. Then, everyone dives into the treats on the cookie table while waiting their turn for the big event... getting to see Santa! Given that Larkin is 18 months, we had heard from a number of people to expect that she would be scared of Santa. Nope, not our girl! Larkin started squirming, then wriggling, and then channeling a greased pig in her attempts to leap from her Daddy's arms to get to Santa! Thank goodness we were near the front of the line (I had staked out the joint early on so I would know where the line would be forming)! Larkin just LOVED Santa! As you can see from the pictures, she wasn't the least bit afraid, and actually was downright fascinated. If it hadn't been for the candy cane they gave her afterwards, I'm not sure she would have gotten off his lap!
Posted by Karen Hittle at 10:45 PM