We went to Boston to celebrate the joyous occasion of Larkin's baptism. We were blessed with an unbelievably beautiful day and we were joined by family and our good friends. We waited until now to baptize Larkin because Larkin's godfather, Mauricio, was in Iraq for over a year and just came back a couple of months ago. We are so glad that he is home safely and that we all could celebrate together.

On Saturday night, the evening before the baptism, we took everyone to Maggiano's, a family-style Italian restaurant. There was so much food and it was delicious! My favorites were the fried zucchini and the tiramisu. Here are a few cute pics from the dinner. 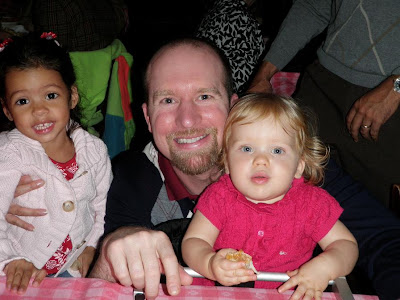 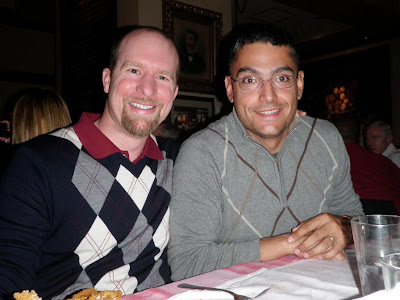 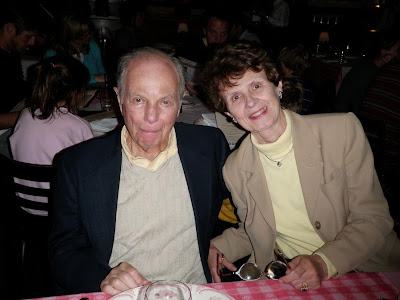 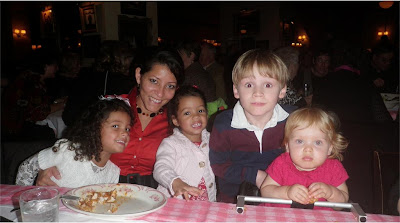 On Sunday, October 11, Larkin was baptized at the Old South Church, a Congregational Church at Copley Square (corner of Boylston and Dartmouth). Here are a few pictures of Larkin and us in the pew, prior to the service beginning. 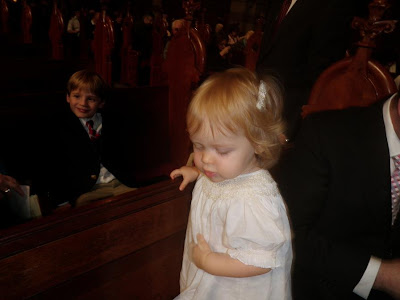 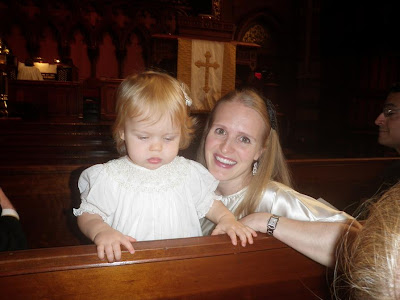 The Rev. Quinn Caldwell was the minister that baptized Larkin. Larkin really loved him - she had touched foreheads with him earlier, and then during the service, Larkin looked up at him in awe while he was putting the water on her forehead, and then she even laid her head on his shoulder afterwards. They really had a special connection. Larkin had been a bit squirmy up until Rev. Caldwell held her and baptized her... it was like she was at peace then. It really was a heartwarming and spiritual moment. I really love the way the Old South Church does their baptism services. While the ministers has the ability to bless the water themselves, they ask the children of the congregation to come up and help them bless the water (that's why there are children standing in front of the altar). Then, after the ceremony, the minister takes the baptized babies around the sanctuary to introduce them to the rest of the congregation. It was a beautiful ceremony. Joining us in attendance for the ceremony were: Larkin's godparents Gisa and Mauricio, their daughters Melanie and Katie, Grandpa Bud, Auntie Dana, Uncle Greg, Gavin, Luke, my father's sisters Marilyn, Peggy, and Carmy, Marilyn's husband Ralph, and family friends Anne and Bill. Thank you, everyone, for coming and being a part of Larkin's special day! It really means a lot to us. 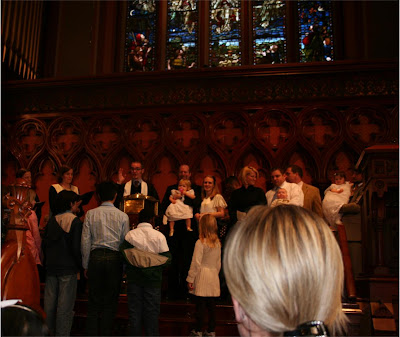 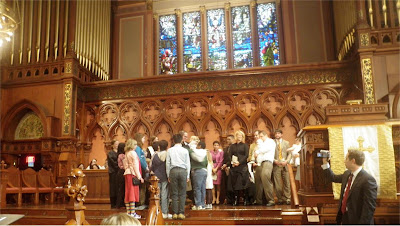 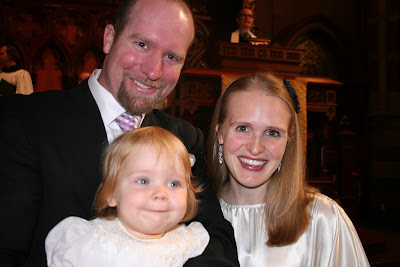 After the baptism, Grandpa Bud held a celebratory brunch for Larkin at the Copley Plaza Hotel's Wine Room. We had wonderful food and the kids had fun running around like Madeleine in the Park Plaza Hotel! We got a great group shot of everyone there, as well as other great shots of the party. Thanks again, Grandpa Bud! 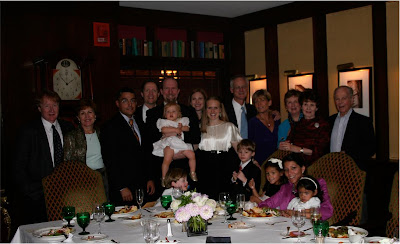 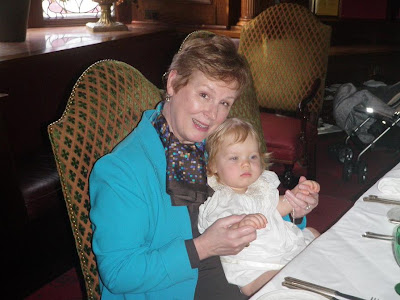 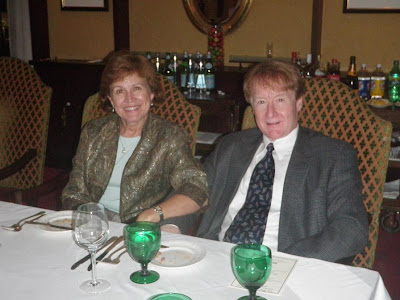 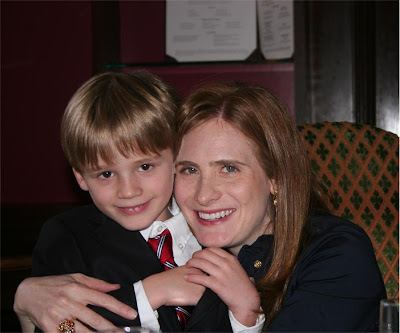 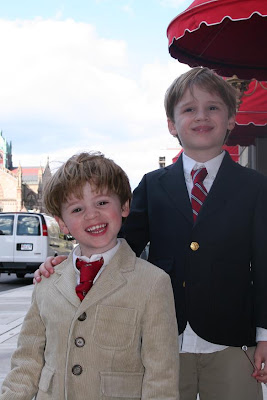 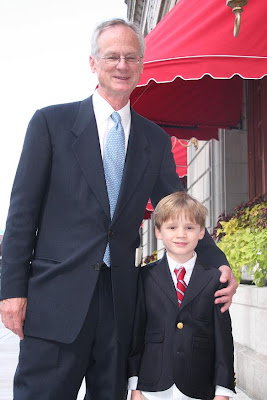 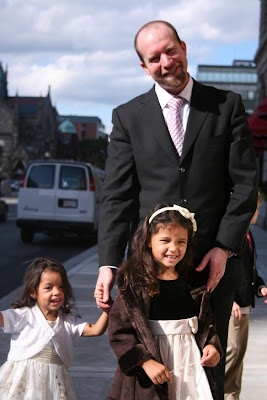 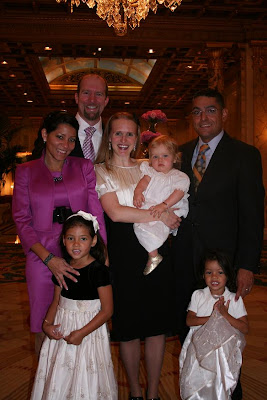 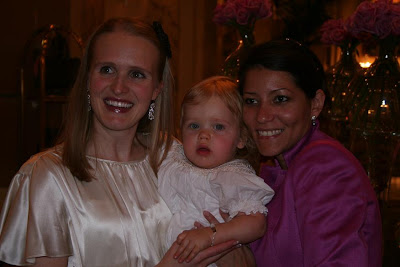 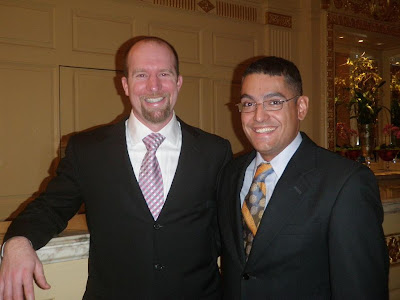 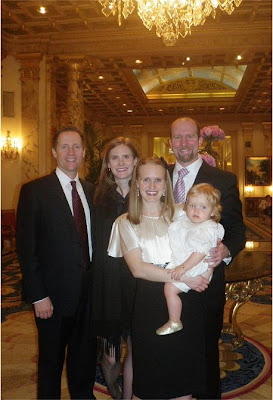 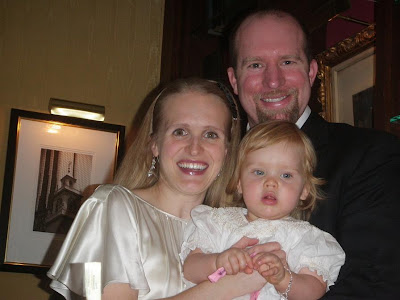 After the party was over, it was time for Dana, Greg, Gavin and Luke to head home. We had to have one more piece of fun, though, before they left. Here's a fun video of us playing on their deflating blow-up bed!