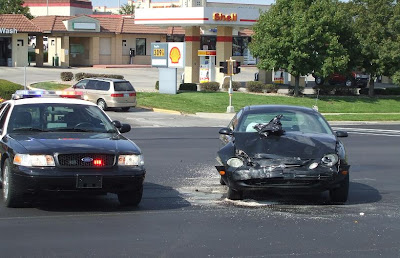 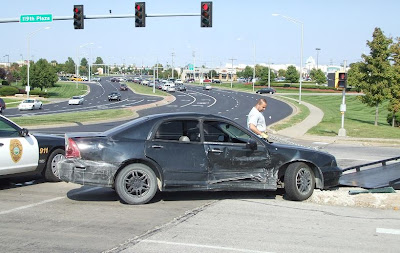 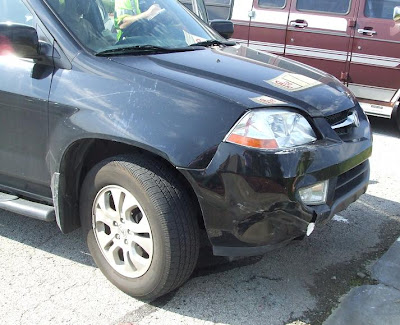 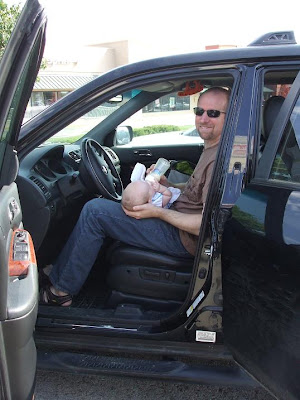 This is not the sort of "first" that we wanted, but today Larkin was in her first (and hopefully last!) car accident. We were on our way to Target and were in the left of two left-turn lanes. We started to turn when we got our green arrow, and just as we were half-way through our turn, a car came careening from the opposite direction and ran their red light... he didn't slam on his brakes, he didn't swerve... no, at full speed he broad-sided the car in the lane to the right of us that was also turning left. A girl was driving the car that was T-boned, and her car spun around and hit us in the right front corner. The jolt was strong and the noises were loud, so Larkin started screaming as soon as our car came to a stop. Thank goodness, she was crying because she was scared, not because of any injury.

The man who was driving the car that ran the red light was in a complete daze. He didn't even ask if any of us were okay. He just stood there confused and disconnected. When I asked the police if they were going to give him an alcohol or drug test, they said that yes, they were going to because they found a long laundry list of prescription drugs in his car. Figures. There is just no excuse. He could have killed somebody. We are so lucky that Larkin was strapped in her car seat in the middle of our back seat. A nurse came out of a nearby restaurant to check her over and reassured us that she was okay. Larkin calmed down relatively quickly and was such a good little girl as we passed the time for the 90 minutes or so that we were on the scene. The college girl in the car that was directly hit was really shaken up... she didn't remember parts of the accident and was still crying when her family took her away. Some witnesses stopped and were such a big help and we were so grateful that they were generous with their time and compassion. The whole event was mostly just an inconvenience for us, but it made Brian and I really realize just how lucky and blessed we were.

The pictures above show you a small glimpse of what happened today. The first picture is of the man's car who caused the accident (his car spun >90 degrees). The second picture is of the girl's car that was broad-sided... the passenger door was half-way into the passenger seat (luckily no one was in that seat). The third picture is of our car with its relatively minor damage. And, the fourth picture is of Brian and Larkin hanging out at the scene while we waited for the police to sort it out and write up the report. When it was all said and done, we finally did make it to Target and enjoyed the rest of our afternoon out together.
Posted by Karen Hittle at 10:09 PM