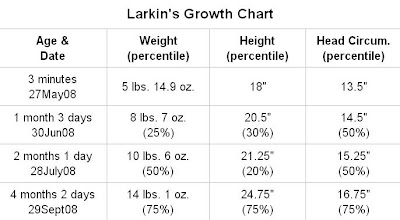 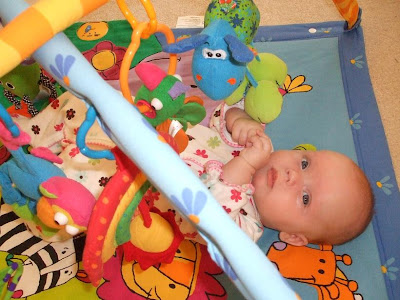 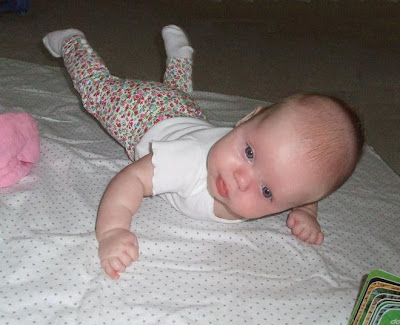 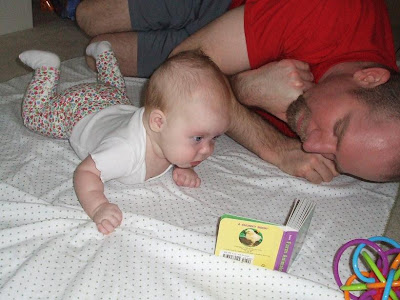 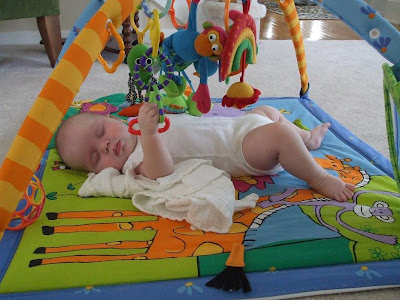 Today, Larkin had her 4-month doctor's appointment. It went really well and, as you can see from the summary growth chart above, she is growing so big! She weighed in at 14 lbs 1 oz, her height is 24.75" (that's over 2 feet tall!), and her head circumference grew to 16.75". Those measurements put her in the 75th percentile for each category (as compared to babies born on her due date, or 3.5 weeks younger than her). I guess that means she's well proportioned!
As expected, today Larkin also got her next round of vaccines (3 shots and 1 oral). :( She got the same ones as last time: DTaP (Diphtheria, Tetanus, and Pertussis), IPV (polio), Hepatitis B, Hib (Haemophilus Influenza type b), Prevnar (pneumococcus), and Rotavirus. She ran a low-grade fever, getting up to 99.8 degrees F, but otherwise has not been too fussy. She's a tough cookie. Although.... at the appointment, the nurse was making funny faces at her while she gave her the oral vaccine and at one point got a little too "in" Larkin's face and it really scared her! Larkin started screaming and the nurse hadn't yet even begun the shots! She finally calmed down by the time we left the office. Phew.
The doctor also told us that Larkin can now start solid foods! He said that we can start her on them now, but I think we'll wait another few weeks before we do. Anyway, when we do, we're to start with 1/4 cup of either rice cereal or baby oatmeal mixed with formula, given twice a day for 3 weeks. Then, after 3 weeks of that, we're to give start her on 1/2 jar of yellow and orange (and then later green) veggies twice a day, as well. All that in addition to the 25-32 oz. of Similac Organic formula she drinks daily. That's a lot of food! It looks like those cheeks will keep getting chubbier!
In addition to Larkin's summary growth chart, above you'll find some other photos taken this past weekend when she turned 4 months old. I love how in the third photo she lifts her legs up behind her when she's on her tummy and raising her head - it's so cute! I also thought it was hilarious when she fell asleep holding her playmat toy... she was literally playing one minute and then was asleep the next (see pic 4)!
Posted by Karen Hittle at 8:22 PM