Another trip to one of our favorite young kid spots... Deanna Rose Farm. This time we went with some of Brian's family... beloved Nama and Papa, Aunt Jenny, and cousin Sierra. It was stifling hot but we all had a blast nonetheless.

Our first stop was the one-room school house, and then we were off to the dairy barn. They have one big mama cow and a few baby cows. If you arrive at specific times, you can watch them milk the mama cow and then feed the milk to the baby calves. Here is a picture of Larkin and Brian with a couple of the calves. Larkin likes to stick hay through the fence and have a calf eat from her hand. The picture below that is of Larkin practicing milking a cow. They have a fake cow with rubber teats on her udder that the kids can play with (it shoots out water). It's a fun activity for the kids and Larkin always loves going over there to give the teats a tug. 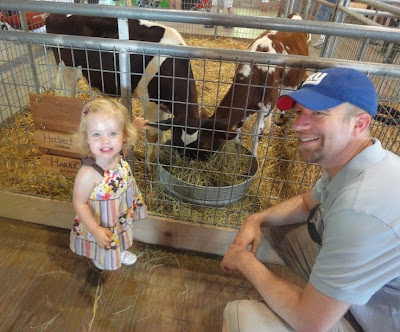 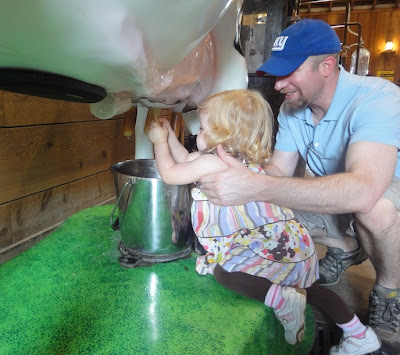 After the dairy barn, we went over to the Indian encampment (it is really cool). Brian, Larkin and Nama took a picture by a buffalo statue and in the background you can see the barn which is the main entrance to the farm. 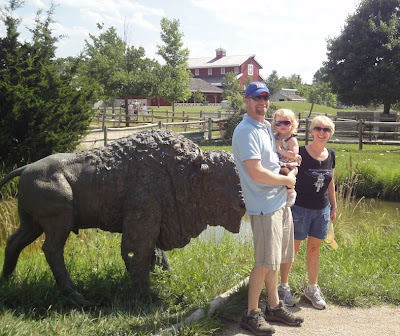 Of course... feeding the goats... This is always a favorite activity and from now on I have to remember to bring a lot more quarters for goat pellet food because Larkin gives it to them so quickly! Check out the cute video of her feeding the goats (you'd think the goats are starved by their eagerness for the food, but they are fed a ton of pellets each day). 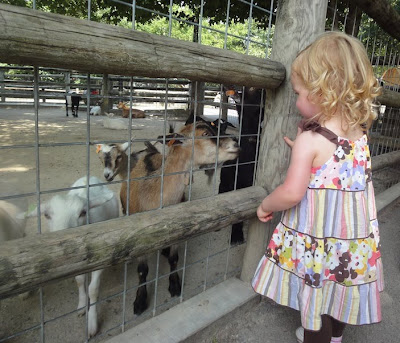 It was so hot, everyone had to take periodic breaks to rest and cool off. Larkin and Sierra enjoyed the swinging benches throughout the farm. On one, they shared the bench with their Aunt Jenny, and on another, they sat between Nama and Papa. The video of the four of them on the bench below is really cute... Larkin gives Sierra a kiss, Sierra rebukes Larkin's attempt to hold her hand so Larkin holds Nama and Papa's hands instead, and then Papa swears at the end! Ah, the memories! 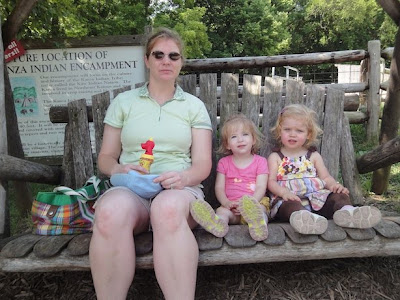 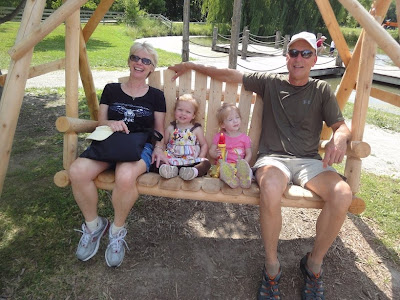