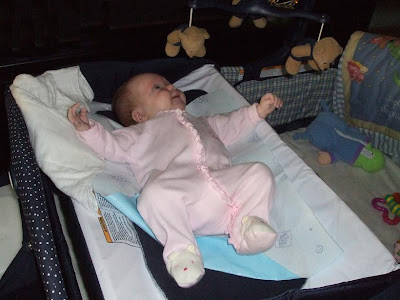 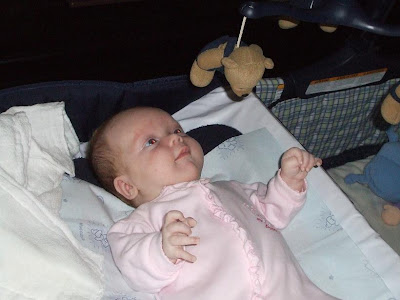 Larkin has found her first friend... Mr. Bear! We have a mobile on Larkin's pack n' play that, at first glance, would not strike you as very impressive. It doesn't have any lights, sound, or movement. It's what you might call a simple mobile, with only 3 matching teddy bears that spin around when you manually turn it. It was Grandma Cook who first introduced Larkin to the three little bears... as she'd turn the mobile she'd say, "Here's Mr. Bear, here's his brother.... Mr. Bear, and here's his other brother... Mr. Bear"!
This "Mr. Bear" mobile came with the playpen so I put it up to use as a temporary toy until I got a more exciting one. Well, my procrastination worked in my favor... after days of ignoring the boring bears, one day Larkin "discovered" them and fell in love! Larkin is mezmerized by Mr. Bear now... she smiles at him, coos at him, and bats at him with her hand. He, and his brothers, are her first friends!
Posted by Karen Hittle at 10:02 PM