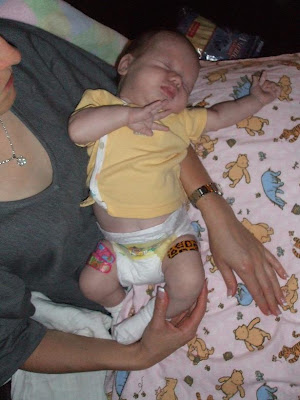 Larkin was so brave yesterday. She had her 2-month doctor's appointment and got her first shots. As you can see from her 2 Barbie and 1 leopard print band-aids in the picture above, she got a total of 3 shots and got one oral vaccine. Larkin's shots included: DTaP (Diphtheria, Tetanus, and Pertussis), IPV (polio), Hepatitis B, Hib (Haemophilus Influenza type b), Prevnar (strep), and Rotavirus. She cried for a minute or two while the nurse gave her the shots, but then she was so brave and stopped crying as soon as I picked her up. I think they hurt me more than they hurt her!
I was expecting a rough couple of days following the shots, but Larkin has done wonderfully. Her fever got up as high as 100.5 degrees F last night, but she never really got fussy. Instead, she was sleepy and just wanted some cuddles. Today, Larkin has been great... as strange as it might sound, I feel like today might be Larkin's best day yet! She's been really happy, sweet, giggly, loving, and she's been napping well... not like I would have expected after the shots.
As for her other doctor appointment statistics, Larkin looked great... She was 8 weeks 6 days old yesterday and she weighed in at 10 lbs, 6 oz., which is the 50th percentile (compared to babies born on her due date, not her actual birthday). Larkin's head circumference was 15.75 inches which is also in the 50th percentile, and her height was 21.75 inches which is in the 20th percentile... so, she's smart like her daddy and is a shorty like me!
Posted by Karen Hittle at 10:36 PM